THE LEGACY OF INCA 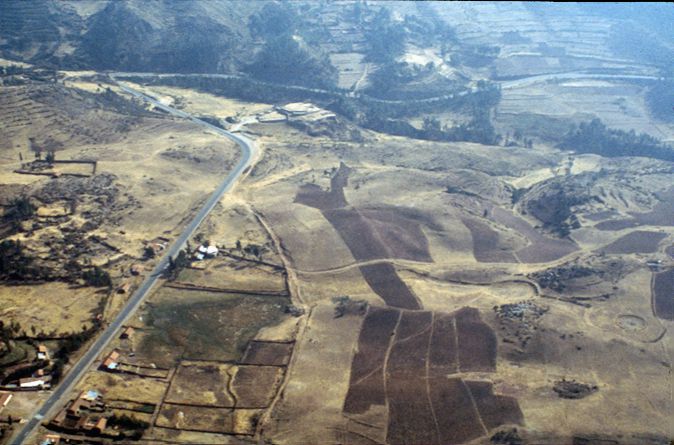 The entire landscape of Machu Picchu was carefully planned by the Incas, leading to an uninterrupted tradition of hydrating soil. Even Fernando Astete himself once wrote a special thesis on hydraulic systems in Peru during his youth. Why did he care about soil in Machu Picchu? And why should we care?

The picture above was taken in the seventies, before the same area was completely built upon and exploited for urbanization. On the left side, near the area of Puca Pucara of Machu Picchu, a road is clearly visibile, from which a path, an Inca path to be precise, departs towards the right side of the frame. This area of the picture presents a couple of interesting circles marked on the ground. These are, in fact, hydraulic systems, which are nowadays scarcely visible, as the entire surrounding site has been constructed and covered by houses. The whole area also pullulated with canals, water reservoirs, and other types of systems developed by the Incas for the hydration of soil.

“Nowadays”, explained Adine, “you would never see something like this. Systems of irrigation have changed and the soil is not being given any priority. All there is on that ground is buildings.”

The reason why the Incas were so concerned with the health of the soil in the valley of Cusco is the presence of eucalyptus trees in the upper part of the picture above. These trees, which are commonly referred to in the area as the sharks of the forest, assimilate so much water from the soil, that the flora in the lower part of the picture struggles to have enough to survive.

Therefore, the Incas would have never removed the other species of trees of the forest which are visible in the upper part of the frame. If one was to destroy all the trees there, in fact, all animals would disappear from the area, including big predators, while interrupting the food chain. It is no wonder that, due to recent deforestation and construction activities, condors do not appear in the Cusco valley anymore.

Nowadays, through a very slow process, we have deforested majority of the area for both construction and agricultural purposes, causing an ecological clash. The Incas, however, were able to combine the use of both the biosphere and construction, through an incredibly elaborated process called agroforestry. The Inca population knew, in fact, that separating environments would alter the ability of nature to regenerate itself. The combination of both forest trees and fields, instead of separation, was also useful to create shadow.

“No plant grows alone, including the very wild ones, the semi-domesticated and the domesticated. Even giant trees that only live in extremely wild, such as the cedro, which are very tall and big and live thousands of years, have a network of mushrooms to speed up the amount of nutrients that they assimilate. If trees’ roots cannot germinate in non-forest areas, mushrooms or other organisms decide what kinds of forests grow. Many trees therefore need shadows.”

Agroforestry is just one of the many examples of sustainable agriculture and construction by the Incas, whose legacy teaches us that nature must be respected and shows us that tourism in Machu Picchu is not only about visiting an archeological park, but having an overall unique and sustainable experience.