THE FIRST AERIAL IMAGE OF THE SAQSAHUAMÁN 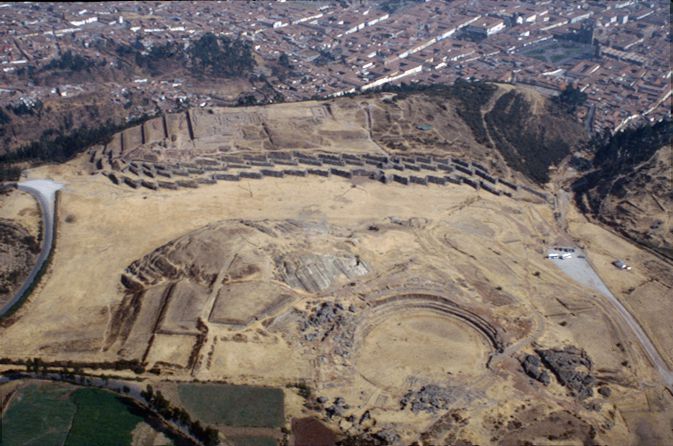 Outstanding in the archaeological site are the bastions of Saqsqahuamán and the Suchuna area, connected through the central opening in space of the park.

This image of Saqsahuamán, taken by Fernando Astete, shows the trace of the city of Cusco at the top of the picture, right above the first mount, surrounded by a zigzag wall. This is the only part of the bastions that is usually considered and appreciated when publishing. However, Saqsahuamán is way bigger because the parts that can be seen at the bottom of the picture are also a part of it. The bigger round part at the bottom is known to be a public area, which originally served as a water reservoir and became a sacred artificial lake, made and used by the Incas. It was also used for water distribution around the city of Cusco.

This image, in fact, is a very important picture, not only because of what it shows, but also because of its significance.

For example, as Adine Gavazzi, a Swiss architect specialized in anthropology of the Andes and the Amazon, explained:

“It is so interesting because it is reproducing a sacred topography, with all the sacred elements you need to perform all the ceremonies, but it is not just the two mounts. It has been built up to have all these elements together, to have ceremonies.”

Another fascinating fact is that this was literally the first picture to ever be taken of the site from the sky. Before this, nobody had ever taken pictures of the Saqsahuamán, comprising all areas. Thus it is the first complete aerial picture of this part of the site, which increases its overall historical significance and value.